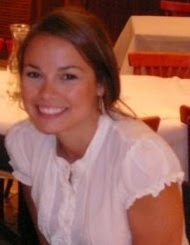 Elizabeth Newman--Labor to Neighbor Field Organizer, San Diego and Imperial Counties Labor Council
Elizabeth Newman is the Labor to Neighbor Field Organizer for the San Diego and Imperial Counties Labor Council. She is from both Minnesota and Colorado, where she grew up snowboarding and singing. She graduated with her B.A. from Macalester College, in St. Paul, MN in 2007, majoring in Sociology and Women’s, Gender, and Sexuality Studies. There she developed her real passion for social justice and equal rights. Her first major political action was when she joined 50 other students and activists on a 24-hour bus to Washington, D.C. to join the 2004 March for Women’s Lives. After college, she worked to elect Senator Al Franken as the Volunteer Coordinator and then the Political Coordinator for his campaign; among the many things she learned, she was thrilled to find out that both she and Al love the Minnesota State Fair. Outside of the office, Elizabeth enjoys cooking and hiking with her dog.
Fellows 2010
Do you like this page?
Tweet