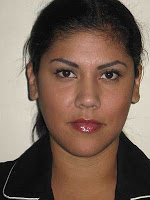 Denise Serrano is the education & advocacy associate for the ACLU of San Diego & Imperial Counties, where she helps develop and implement strategies to deploy the affiliate’s 9,000 members in the region as advocates for civil liberties. Serrano builds and nurtures relationships with community leaders and coalitions that work on priority issues and statewide campaigns, including immigrants’ rights, education equality, LGBT rights and finding alternatives to the death penalty.
Serrano speaks in public and to the media on behalf of the ACLU and is the organization’s chief commentator in Spanish. She chairs one of San Diego’s most active anti-death penalty groups, Taxed to Death, which brings together local religious, civil rights and legal groups to advocate against the death penalty in the state of California and also serves on the Public Policy Advisory Committee for a coalition of LGBT organizations in San Diego. Previously, Serrano was active in the Legislative Action Committee with the California National Organization for Women (NOW).
Serrano is bicultural and binational, having been born stateside, but raised in Tijuana, Mexico. She completed all of her early schooling in Tijuana, and obtained her bachelor’s degree from San Diego State University.
Fellows 2011
Do you like this page?
Tweet