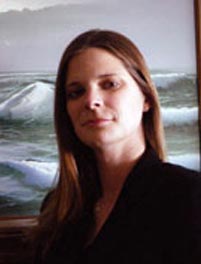 Laura Sheppard was raised in Berkeley, and moved to San Diego in 2003 to care for her grandmother in Poway. She has lived in Golden Hills, North Park, Normal Heights, Spring Valley, and the College area. She now owns her first home in City Heights, where she is a dog owner, and the president of her Homeowner’s Association. Her favorite San Diego locales are the Zoo, the local dog parks in Balboa Park and Kearney Mesa, the Ocean Beach volleyball nets, and Tioli’s Crazy Burger. She is a member of North Park Baptist Church and Harbor MidCity Presbyterian Church in City Heights.

In the political arena, Laura is proud to have devoted time to the campaigns of such progressive leaders as Donna Frye, Lorena Gonzalez, Patty Davis and Howard Wayne. She has also advocated for the city’s hardworking paramedics at San Diego Medical Services Enterprise. Laura is a graduate of Gonzaga University in Spokane, Washington, with a major in theatrical design and a minor in fine art. She is also a graduate of the University of San Diego School of Law, and a recent admittee to the California Bar. She plans to practice as a criminal defense attorney for indigent youth, and also work on post-conviction needs such as appeals, and justice in parole and probation decisions.