A Lesson From Homer Simpson

Sadly, I relate to Homer many times throughout the day or week or month. Sometimes there’s so much going on that doing things that are hard just doesn’t seem worth doing. Homer gets laughs for being a dumb, lovable oaf. But, he’s also a cautionary tale that if I’m not careful with apathy I may very well end up a pudgy, donut-loving, beer-drinking, yellow-bellied, TV-addicted caricature of myself getting laughs for being a lovable oaf with four fingers.

The other day I entered my office, put my lunchbox on my desk, and saw it staring back at me with the following statement: “If something’s hard to do, then it’s not worth doing.” –Homer Simpson 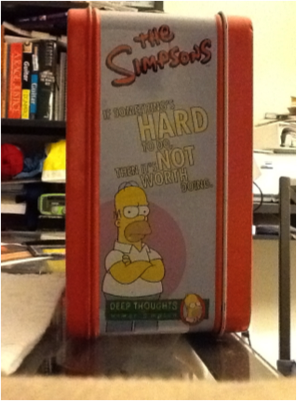 New Leaders Council is jam-packed for five months of self-reflection, networking, and information shoved into your brain. It is hard having to give up every other Saturday and trying to retain all the information being thrown at you. But, it is worth doing.

Too many times, we get used to our routines and the company we keep that jumping out of routines and meeting new people is hard. But again, it is worth doing. Since the first weekend of NLC, I knew that the deep commitment to the program would mean expanding the people I know and enriching the community I live in by learning new skills that’ll later become useful. In my line of work, I’m constantly surrounded by immigration attorneys and non-profit folks. NLC opened up a world of new folks with different community ties. This is one of the greatest benefits of being a fellow: creating relationships with other young, progressives and connecting our networks. And, of course, making new friends.

Every so often in life, we have to know our limitations. But awareness is different than just avoiding all things that are hard in life. NLC is definitely something worth doing. And just remember. Despite Homer’s quote, he’s a guy that’s gone to space, won a Pulitzer, beat up Pres. George H.W. Bush, won a Grammy, bowled a perfect 300 game, partied with rockstars at Lalapalooza, saved Springfield from nuclear meltdown TWICE and all with an IQ of 55. So I’m sure all of those accomplishments were hard for Homer, but he did them anyway and was better for it. And anyone with the opportunity to be part of NLC as a fellow will be better for it too.