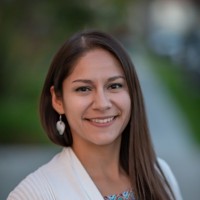 Maria ​is currently Account Manager at the San Diego branch of Strategies 360. Previously, Maria serv​ed​ Mayor Todd Gloria as his Confidential Executive Assistant​ in the City of San Diego, and former Congresswoman Susan Davis as her district staff assistant, community representative, and scheduler.

Maria completed her two-year Masters in China Studies at Zhejiang University International College in 2018. In Zhejiang, Maria was part of the founding team to create the first legal and independent foreign-only student government in the country. She worked as a consultant for the university, in addition to serving in the Virtual Student Federal Service of the USA Department of State researching disinformation and propaganda for the Global Engagement Center.

Maria graduated from Haverford College with a B.A. in Political Science, minor in Chinese, and concentration in Peace, Justice, and Human Rights. At Haverford, Maria worked with the Office of Multicultural Affairs for four years and was part of student government for two years as the Officer of Multiculturalism and Co-President. In both positions, she coordinated with student organizations, implemented programs, and collaborated with staff and administration for campus-wide projects.