On February 17, 2013, the U-T San Diego profiled the San Diego Leadership Alliance in a featured story.

A group of 20 civic-minded young San Diegans don’t know if they’re going to change the world, but they want to give it their best shot.

They’ve been gathering together every other Saturday to hone their civic engagement skills through a series of lectures, discussions and exercises that organizers say prepares them to become community leaders.

When it comes to progressive leaders in San Diego, there's one local organization working to produce the next generation of leaders. That organization is the San Diego Leadership Alliance. The SDLA is a nonpartisan, nonprofit organization.

It's New Leaders Council Institute is a program that equips Fellows with the skills, opportunities and relationships to make change in San Diego as well as providing them with the tools they need to take the next step in their careers. Joining me this morning is San Diego Leadership Alliance Board Co-Director, Johanna Schiavoni and 2013 New Leaders Council Fellow, Mark Leo.

Listen to the whole interview here. 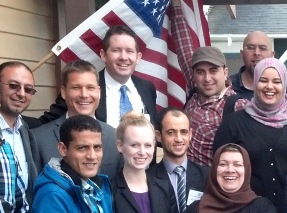 On Wednesday, February 6, 2013, SDLA Board members Shane Yonston and Will Moore, along with NLC 2013 Fellow Sadie Brinton had the privilege of meeting with seventeen rising leaders from the Middle East and North Africa. The meeting was arranged by the San Diego Diplomacy Council under the U.S. Department of State's International Visitor Leadership Program (IVLP).